Smartphones are the prototype of devices in the IoT. Security cameras will soon play a similar role for safety and security. In this article you will learn how new technologies and applications change the game in this industry.

Acting alongside other sensors, such as motion or smoke detectors, security cameras have been in use for a long time, however without being connected to each other through data networks. Growing demands for smart video surveillance in public spaces, commercial buildings, public transport and other areas and the rise of IoT will drive for the further integration of these cameras systems.

Let's see how video surveillance has evolved to this day and where the journey is heading.

The past: standard security surveillance systems

Closed-circuit television systems (CCTV) have demonstrated that they can do what they're supposed to: give humans a better eyesight on the security situation in order to reduce security incidents. CCTV cameras can only show and record video footage and not much more beyond that. As they do not understand what they are watching, they are also unable to do anything about it.

To fight theft, violence, vandalism or fire effectively, cameras must be able to detect and interpret such incidents by themselves. They must also have the capability to cooperate with other systems, such as alarm systems.

This is where the Internet of Things comes into play. It connects network-enabled cameras with other devices and systems that perform other tasks and turns security surveillance into smart safety and security management.

CCTV technology was first used in Germany in 1942, designed to monitor V-2 missiles. It was not until 1949 that the technology was introduced in the US on a commercial basis.

The (not so distant) future: smart security surveillance

The times when video surveillance systems only deliver video that must be continuously observed by humans are over. Machines able to record and analyse video data in one go are already available, and they can provide security managers with deep insights instead of single pieces of information.

This will significantly improve security and security-related processes in many areas and industries by enabling faster and more insightful response to any sort of incidents.

Future security surveillance essentially combines 3 technologies that will completely change the game: computer vision, automation and deep-learning, driven by powerful processors and apps on cameras in the IoT. Let's take a quick look at these technologies…

Get to know more about our traffic management solutions.

Computer vision is becoming smarter because of more sophisticated algorithms, faster devices, larger networks and access to a wider range of data sets through IoT. This allows machines to “see” and analyze in real time.

“Deep Learning and general AI techniques within computer vision, makes possible what would be impossible to do by the naked eye.”

Many threats, such as smoke, are difficult for the human eye to detect in videos, especially in poor lighting conditions. Seconds later, however, a fire may have broken out. Security cameras equipped with smoke and fire detection can alert at an early stage and activate the proper safety measures without any human assistance. 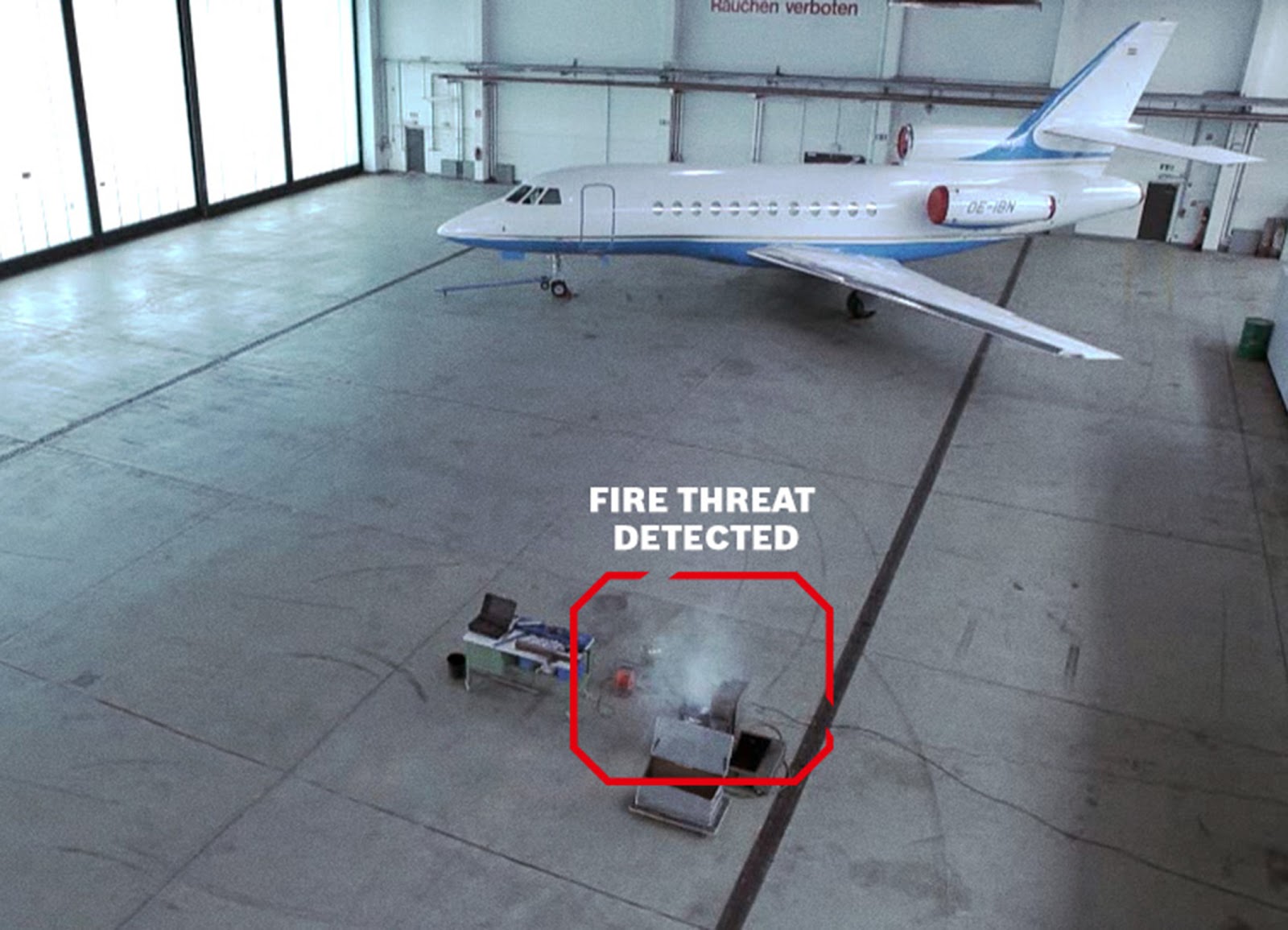 Speed plays an important role in safety and security. The faster you react to security incidents, the greater the chance of preventing or at least reducing damage. In case of theft in a store, every second counts, because criminals may disappear before security personnel can intervene.

Standard security surveillance via CCTV wastes valuable time because reaction paths between machines and human operators are too long. Smart cameras take a shortcut by saving staff from interpreting videos. They immediately deliver notifications or initiate appropriate actions themselves.

The "AI Guardman" security camera helps shopkeepers identify potential thieves in time. Software installed on the camera scans live video streams and analyzes the poses of any person it can see. This data is automatically matched against predefined "suspicious" behavior. When it sees something remarkable, it alerts onsite personnel via app for double checking. Using computers for video analysis is not a new idea. However, there is a problem that slows the development of video analytics: mobile video made on drones or vehicles is full of dynamic variables that can confuse even the most intelligent computers. That's why many companies and startups are working on smart systems using self learning algorithms.

Deep learning is a machine learning method based on artificial neural networks. Video analytics, which gives security cameras the ability to analyze video data on board, is one application of deep learning. Another application is automation, which embeds video analysis into processes.

The good thing about deep learning is that developers of video analytics apps for security cameras don't have to reinvent the wheel themselves. There are already sophisticated frameworks that simplify developing deep learning models, such as Google's Tensorflow, Microsoft’s Custom Vision and IBM’s PowerAI Vision.

To determine whether workers are complying with safety regulations such as wearing helmets, security cameras need to know what helmets look like. In case a person is not wearing a helmet, a camera could react and alert. This is what a simplified training process looks like…

Brief outlook on the security market

Security surveillance in IoT offers a lot of potential for users, integrators and app developers.

• According to Grand View Research, Inc. the global security market size is anticipated to reach USD 167.12 billion by 2025 at a CAGR of 10.3% during the forecast period.

• According to LDV Capital (“A Paradigm Shift in Visual Data Capture”) there will be 44 billion cameras in the world by 2022, 8% of those will be security cameras (over 3 billion cameras)

At Security and Safety Things, we think the “Internet of Eyes” will grow very fast in a short period of time. However, there are some technological hurdles to overcome in order to take full advantage of the possibilities…

On the one hand, fast data networks are needed, which in many regions will depend on whether new standards such as 5G are spread fast. On the other hand, manufacturers are required to upgrade their devices with fast processors, for example, so that complex tasks can be performed directly in the devices.

Last but not least, software plays an increasingly important role in the usability and performance of IoT devices. This is why manufacturers should open their systems to the large number of innovative apps that are created every day.

At Security and Safety Things, we provide the platform to bring devices and software together.

Did you like this article? Follow us on LinkedIn and Twitter to get all the latest information about Security and Safety Things including when and where to meet us at our event days.

Furthermore, register now for our newsletter – and find out how we bring together innovative companies creating a security and safety ecosystem. Help your colleagues and connections know about our insights by sharing this article