AI video technology is about to take security & operations in public transportation to the next level. Here’s how smart IoT cameras will reinvent public surveillance.

The infinite possibilities for a new generation of IoT cameras

What do security cameras have in common with smartphones? And why might security experts soon only need smart cameras to do their job? Find answers here. 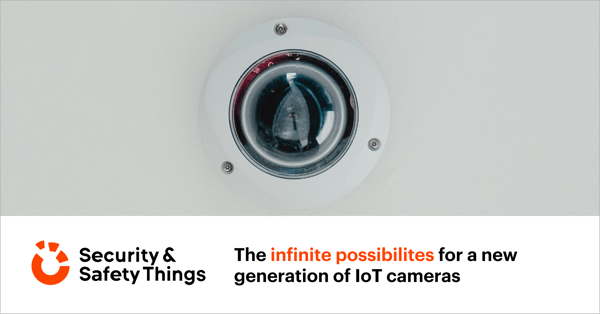 When asked where the surveillance technology is heading, we refer to the development of smartphones from the early days of mobile phones to today's all-in-one devices. Security cameras have more in common with smartphones than you might think. Accordingly, IoT cameras will develop in a similar direction; they already have similar capabilities today!

“The world before smartphones was cold and unforgiving. People waited in lines for minutes on end without entertainment. Bar arguments ended in fisticuffs or someone finally exclaiming “I guess we’ll never know!” Ignoring friends and relatives at the dinner table required ingenuity and imagination. They truly were dark times.” - sciencenode.org

Unlike the first mobile phone, the Motorola DynaTAC 8000x from 1973, smartphones today are equipped with powerful processors and huge data storage, which enable them to run complex applications. Particularly the ability to process large amounts of data has improved massively in recent decades.

Users can download software for their smartphones from App Stores, which offer millions of apps for a wide range of private and professional applications. These apps provide smartphones with almost unlimited capabilities and make them true all-rounders in a connected world.

It only takes 5 minutes to install another app and thus another capability on a smartphone. At Security and Safety Things we see this principle of device enablement through software as a blueprint for many other digital devices on the Internet of Things, particularly...

… for a new generation of smart cameras

Like smartphones, security cameras once began as “dumb” devices that could essentially perform only one function: capture video and forward it to surveillance systems where video information is processed.

In comparison, modern cameras today are much more advanced: Equipped with powerful processors and connected to the Internet, they are ready to perform a wide range of functions related to video, helping make private and business life easier. Applications that were once located in data centers or in the cloud are now performed directly in the cameras (“edge computing”).

5 features you would not expect from a camera

Security cameras in IoT can help optimize security, safety and operations in private and business life. The key to achieving this is in apps developed to make cameras smarter. It is also essential that the cameras can communicate with other systems in IoT. Here are some examples of video applications that will be very common in the near future.

Controlling visitor traffic in large buildings where closed, public and semi-public areas coexist is a challenge for security managers. Where conventional access and locking systems based on ID cards reach their limits or are too inflexible, security cameras equipped with FR can fill the gap. They can even help ensure well-being of people in offices by visually interpreting office conditions and adjusting lighting and heating, for example. 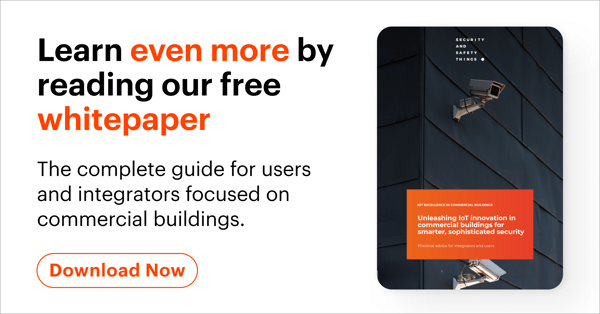 2  Detect fire before it occurs and cause damage

Conventional fire protection systems only detect smoke or heat when fire has already progressed. The same applies to conventional video surveillance, where closed or open spaces are observed by security staff via video monitor. Even with high-resolution video quality, smoke and flames are difficult for the human eye to detect. Smart video cameras equipped with AI can see much better and in case of emergency sound the alarm in time.

3  Help retailers to sell more in their stores

Most people associate retail video surveillance with theft prevention. In fact, many stores are equipped with camera systems for this reason. However, these devices can do much more than just monitor; they can, for example, detect gender and age of customers and present appropriate promotions on digital displays. In addition, smart cameras can detect or even predict queues forming at checkouts and inform staff in time. Applications like these help retailers improve the customer experience in their stores.

Learn more about smart cameras in retail in our free whitepaper

Another example of smart cameras helping retailers improve and automate operations is theft detection and prevention: Keeping an eye on large shop floors with countless shelves costs a lot of time and resources. And even if entire teams are sitting permanently in front of video surveillance monitors, human eyes still miss a lot. Smart cameras can help automate theft detection by recognizing suspicious human behavior. This can even help prevent theft before it happens.

5  Protecting people and machines from accidents at work

Recognizing human behavior combined with the detection of moving objects is also a key technology in our last application where cameras in IoT can do more than just monitoring. In many working environments, security for people and goods plays a major role. In large warehouses, for example, both are at risk when forklift trucks race through narrow corridors between high shelves. Smart video surveillance can help keep track of people and machines' motion to prevent collisions. Or, if an accident has already happened, to identify people lying on the ground and automatically call for help.

Video analysis plays a central role in each of these applications. You could name many more, where cameras equipped with smart apps are able to analyze and interpret video data so that they can automatically trigger appropriate actions within networked systems.

That’s why many of the apps created and marketed on our open IoT platform deal with video analytics driven by artificial intelligence. We are excited to see what innovations will be released here.

With every app that is developed for IoT cameras, thousands of devices around the world may become smarter within 5 minutes. Seen in this light, security professionals may at some point not need any other equipment except cameras.

Did you like this article? Follow us on LinkedIn, Facebook and Twitter to get all the latest information about Security and Safety Things including when and where to meet us at our event days.

Furthermore, register now for our newsletter – and find out how we bring together innovative companies creating a security and safety ecosystem. Help your colleagues and connections know about our insights by sharing this article.